Let me start with a quote from Organic Growing with Worms by David Murphy that totally blows my mind.

'...the organic matter (OM) content of the world's agricultural soils, which used to be 20 percent, now averages less than 1 per cent. If that were raised to 5 per cent to plough depth (approximately 25 cm) 150 billion tonnes of carbon dioxide would be sequestered into the soil...Annualy, our world generates about 15 billion tonnes of carbon dioxide.'

So that means that if we raise the OM content of our agricultural soils from 1 to 5 per cent, we can sequester 10 years worth of carbon dioxide in our soil. Well then. That's good news, isn't it. There is hope yet and it lies under our feet. If that's not motivation to:

1. Compost at home
2. By organic food to support organic farmers who's farming practices increase OM in soil
3. Hate the idea of letting your organics go to landfill to produce methane

then I don't know what is.

I read Organic Growing with Worms many years ago but re read it in preparation for some composting workshops I was giving. This and a few other books I've read recently have made me totally recommit to buying organic. It also made me bring to reality an idea I've had lurking around since completing my PDC last year - starting a community composting bank at Hilton Harvest Community Garden.

We've had compost bays at Hilton Harvest for several years and they work super well turning our garden refuse, chook straw, grass clippings, mulch etc into lovely compost. But as bays are made in 'batches' it was tricky to let people just wander in and add their every day kitchen scraps. Also kitchen scraps could attract (more!) rats to the garden if left in an open bay. We have also started lots of weekly activities in the garden and didn't have a dedicated bin for that either (though the chooks and the worms took some, they are behind our locked part of the garden so not easily accessible to everyone). Another motivating factor was seeing the cafe up the road chuck all their waste into one bin (yes, I had a rummage) which meant precious organics were leaving our suburb and heading to landfill.

So at the end of last year I applied for and received a grant for just over $2,000 from our WA Waste Authority to implement the idea of a community compost bank made from several darlik style bins. And here it is! 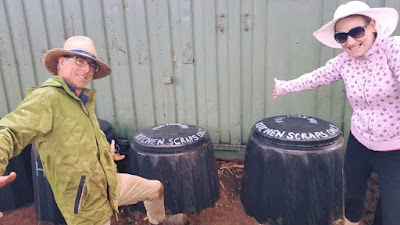 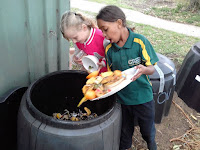 With my fabo Monday Morning gardening crew, we installed the bins a couple of months ago. We have nine at the moment but room for more if we need. In Perth where it gets so hot in summer we  set them up in the shade. We also put mouse mesh on the bottom and dug them in around 20cm to keep them stable and vermin proof. Already lots of people are using them - so exciting to see. We even got into the local paper! And just this week we got the sign in too! Hooray! 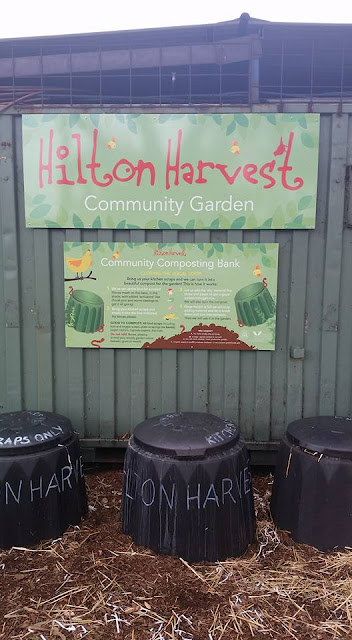 And I'm pleased to report that the Local Cafe is totally onboard. We didn't really give them much choice truth be told. Here are their instructions for the kitchen, new labeled bins and their green wheelie bin which we roll down the road to the garden each week to empty. The system works and I'm chuffed. 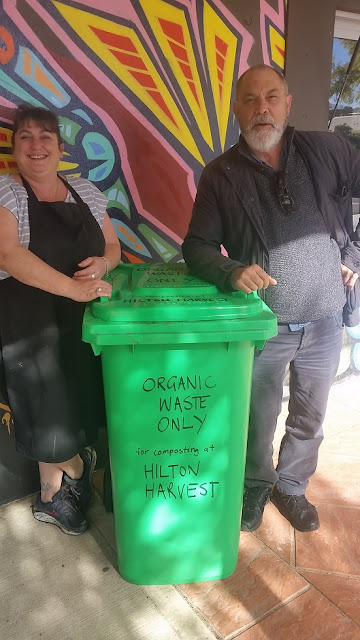 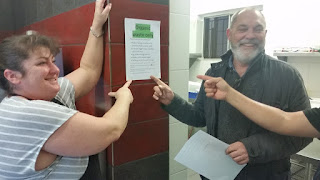 Email ThisBlogThis!Share to TwitterShare to FacebookShare to Pinterest
Labels: community, Outside