Since we got our Whippet puppy, Okey, we've looked into the best diet for him and concluded that raw food was the way to go. Wild dogs have evolved over millions of years to eat raw food and it makes sense that they still thrive on it. Most modern dog food is junk in comparison. Meat and other products that are cooked lose much of their goodness. Did you know that there's no requirement for dog food to have a good balance of nutrients and vitamins, etc. Instead it's full of the waste products from human food, like grains and other cheap fillers. Dogs aren't built to digest carbohydrates, they just pass straight through them with sometimes harmful effects (including hip and elbow dysplasia). Dry kibble or biscuits are also very low in moisture, mostly 11% compared to around 70% for raw food. This means that pets fed on this alone will often struggle to keep hydrated. The benefits of raw food include improvements in skin and arthritic problems. Anyway, I won't rant but I'll just say do some research yourself if you're interested. The book I've read is "Real food for dogs and cats" by Dr Clare Middle. Other useful links are BARF and a good Youtube video.

We started off by buying BARF (Biologically Appropriate Raw Food or Bones and Raw Food) patties. These are easy because it's all prepacked and frozen. The big downside to them is the cost. 12 patties of 227g cost $25 here. That works out to $9.20 a kilo. The other factor which concerned us was the sustainability aspect (all the packaging, transport, issues over how the meat is farmed, etc). So, I decided that I'd look into making my own raw food. After a few tries I found the youtube video linked above. I liked that  it was an easy recipe and it was really raw (unlike others with cooked ingredients!). I've amended it a bit and here's my own version. Your dog will need between 20-30% of their body weight per week of raw food and raw bones.

Here's how I make it. First I pick most of the vegies from the garden and I add lots of variety. This brew has silverbeet, celery, parsley, brocolli, kale and carrot. They're mostly organic and local produce. 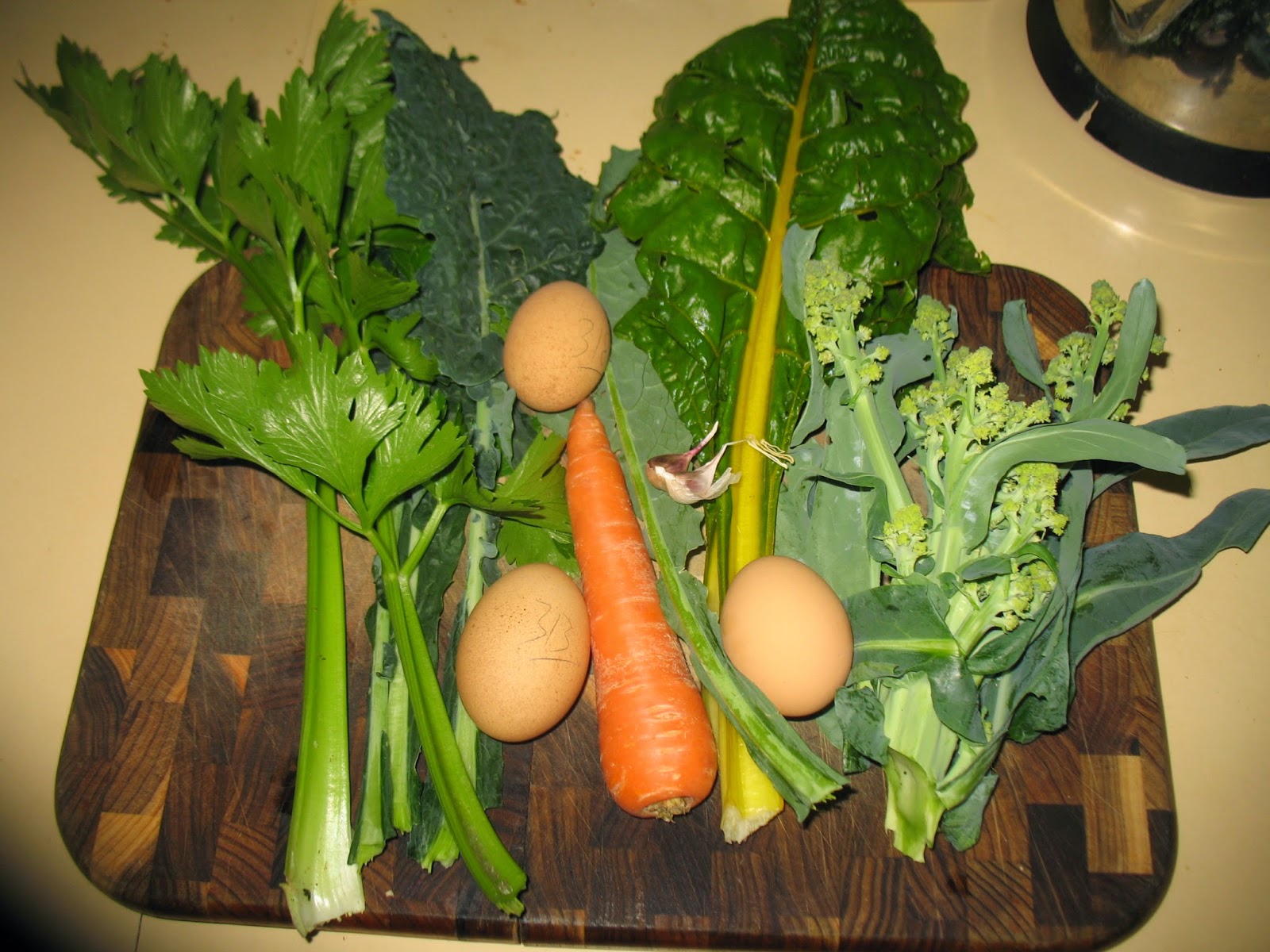 These are then blended along with the eggs, garlic and yoghurt. 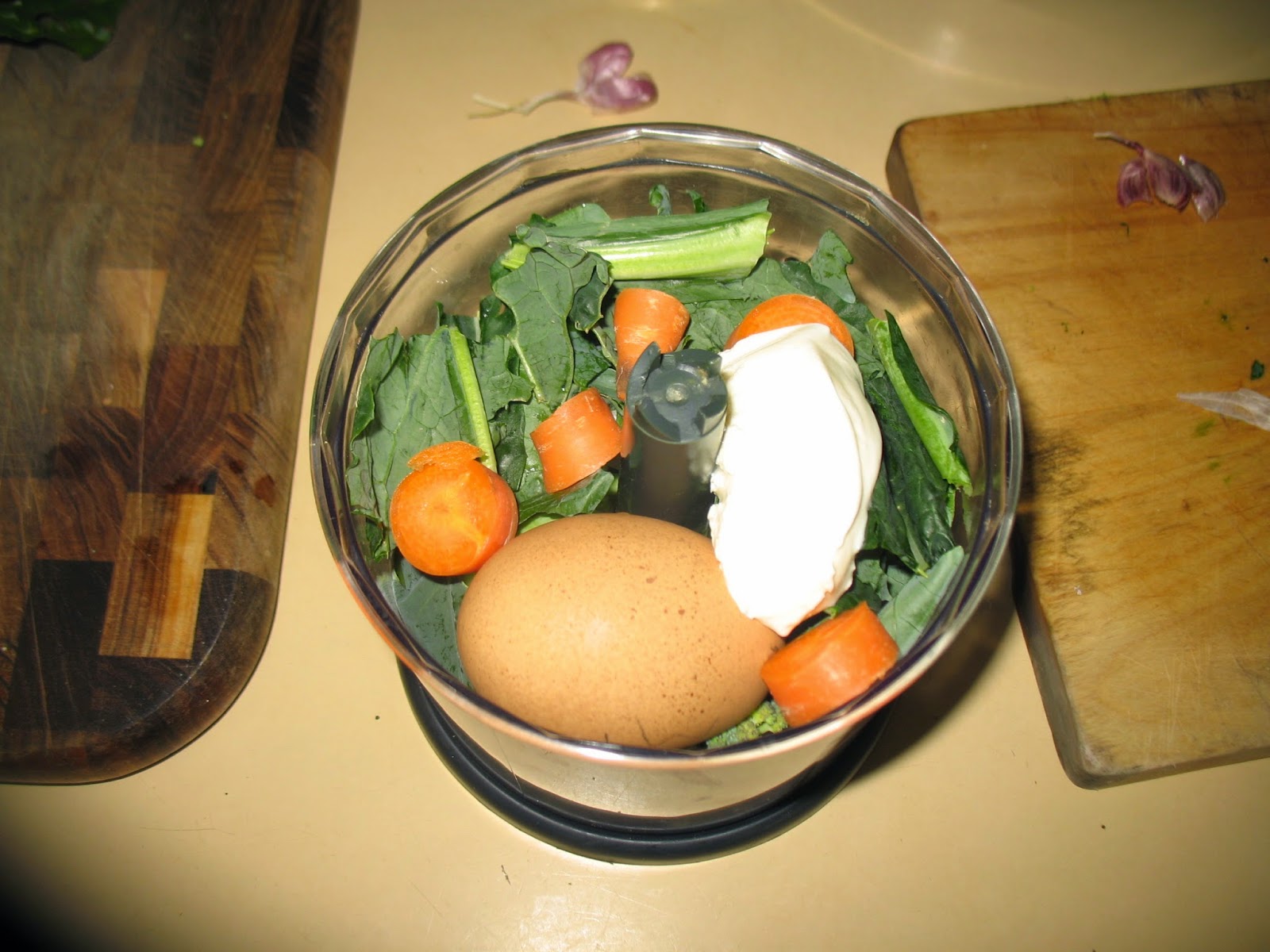 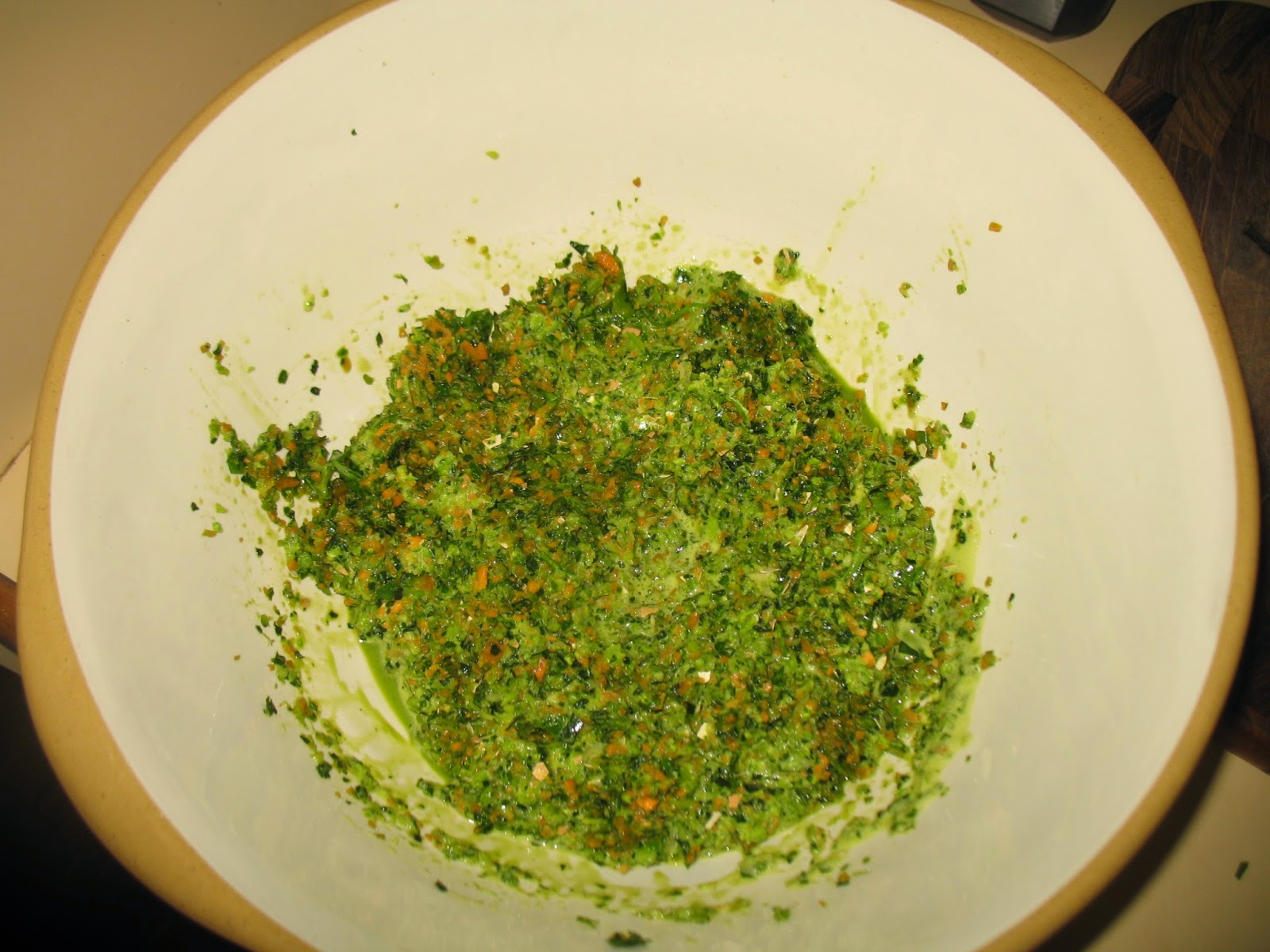 I used to blend the local sardines too but we found that Okey loves them straight from the freezer (doggy icey poles!). If you want you can just pop fish oil tablets in when you serve the food, we just prefer this method because we know the fish source is local and sustainable. 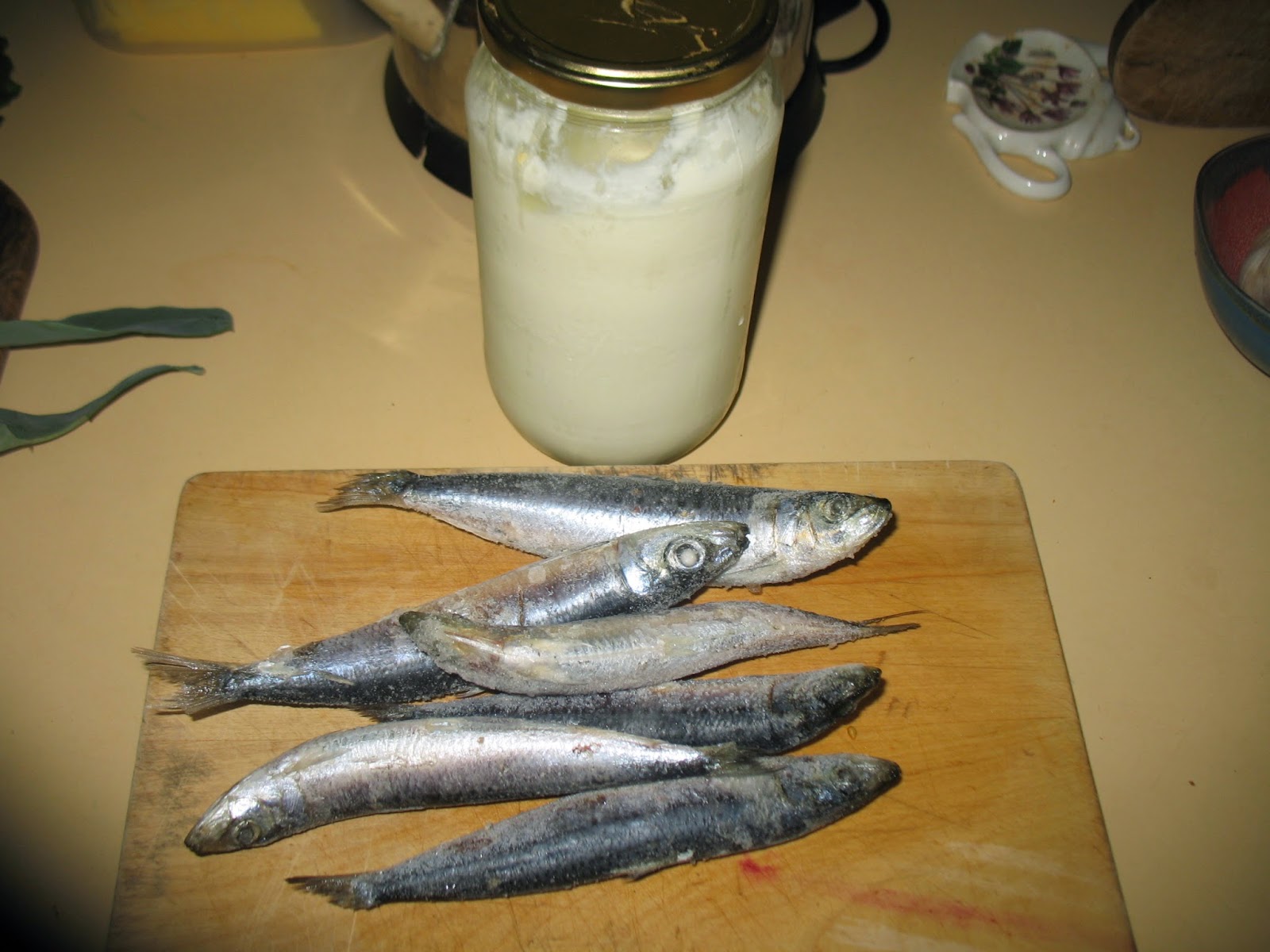 It was interesting finding out why some of these ingredients are used. The vegies and yoghurt contain most of the vitamins dogs need and replace what wild dogs get in the stomach of their prey (partially digested vegetables, fermented mother's milk).

Then I add the meat and offal, it's all from WA and preservative free. 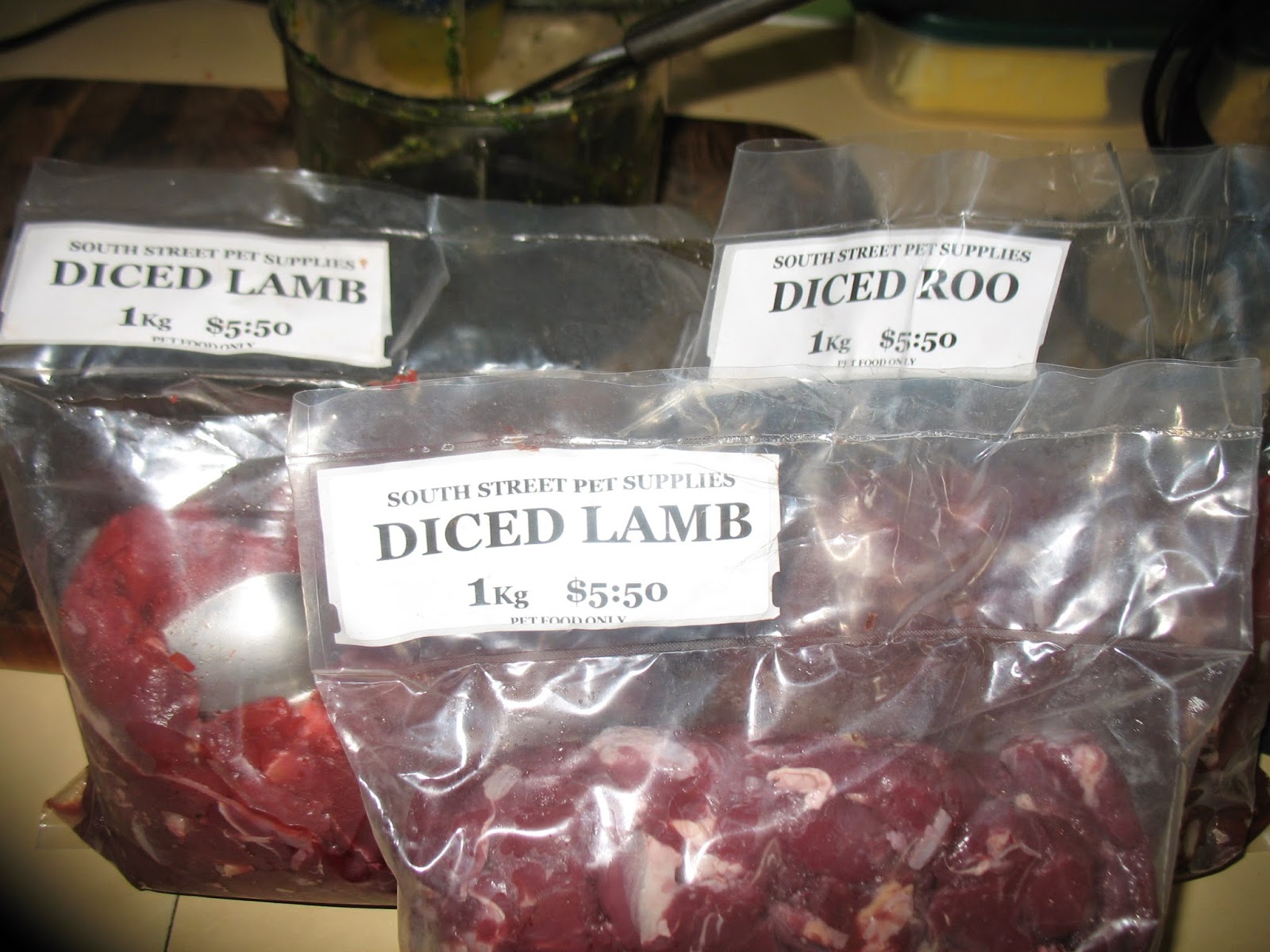 I'd like to use all roo (free range and the most sustainable local meat) but Whippets are quite lean dogs and need fattier meats on the whole, so lamb's a good local choice. Here's what it looks like. It's not much fun for a vegetarian but it goes with the territory when you own a carnivore... Then I simply put it in containers and freeze them. 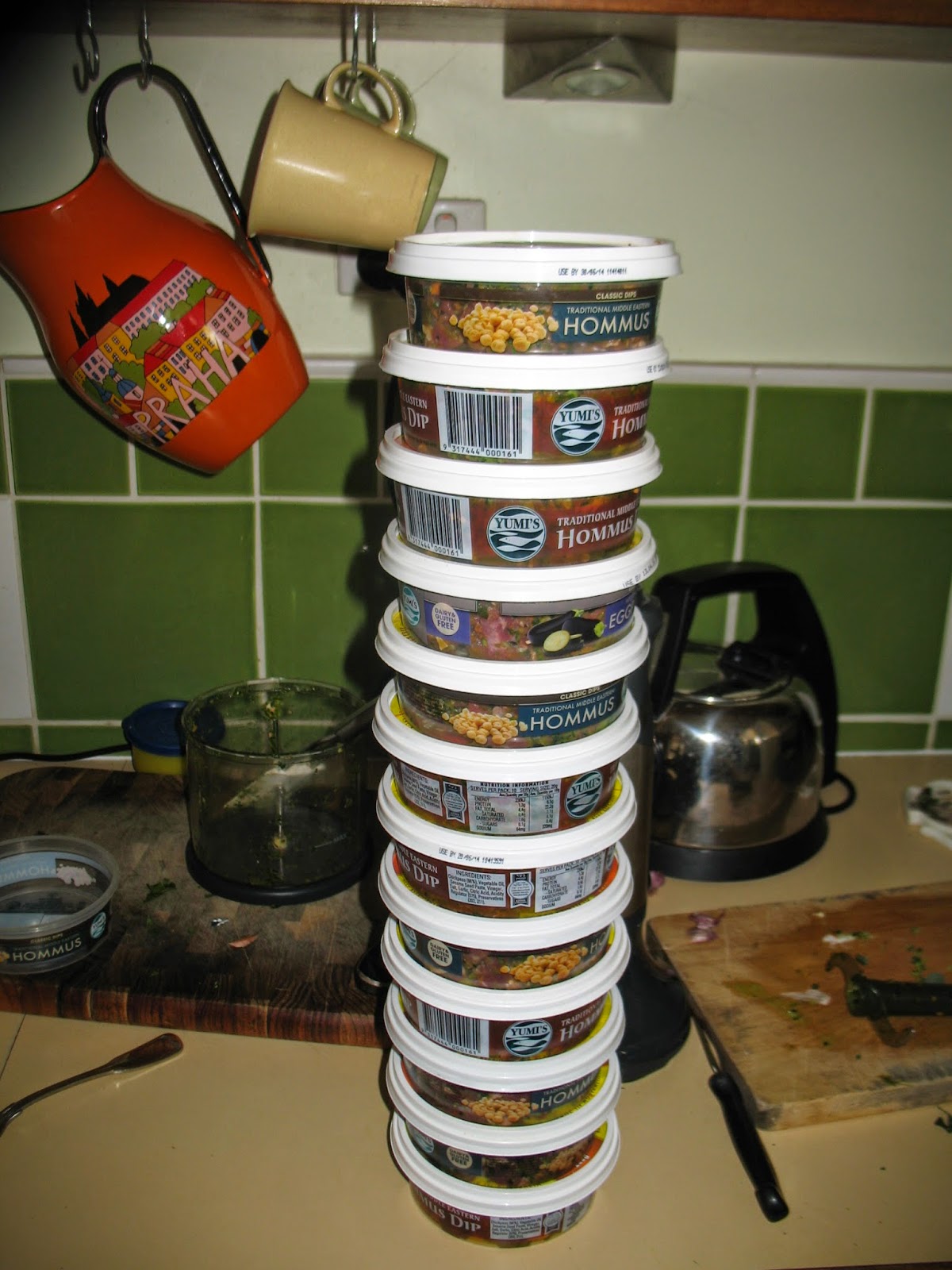 When I serve it I add a pinch of Kelp powder and alfalfa or coconut oil. This brew costs us about $17.50 for 4kg, which works out to less than half the cost of BARF. Sure, it's probably cheaper to buy other dog food, but we figure that we should save money in the long run with lower vet bills.

Okey loves it. We also alternate feeding him a high quality grain free dry food which we add water to when we serve it. It's also important to feed raw meaty bones, so we give Okey lots of these (chicken necks and roo tail mostly). Soon we're going to fast Okey once a week, according to Clare Middle this is a great way to detoxify the liver and keep your dog even healthier. 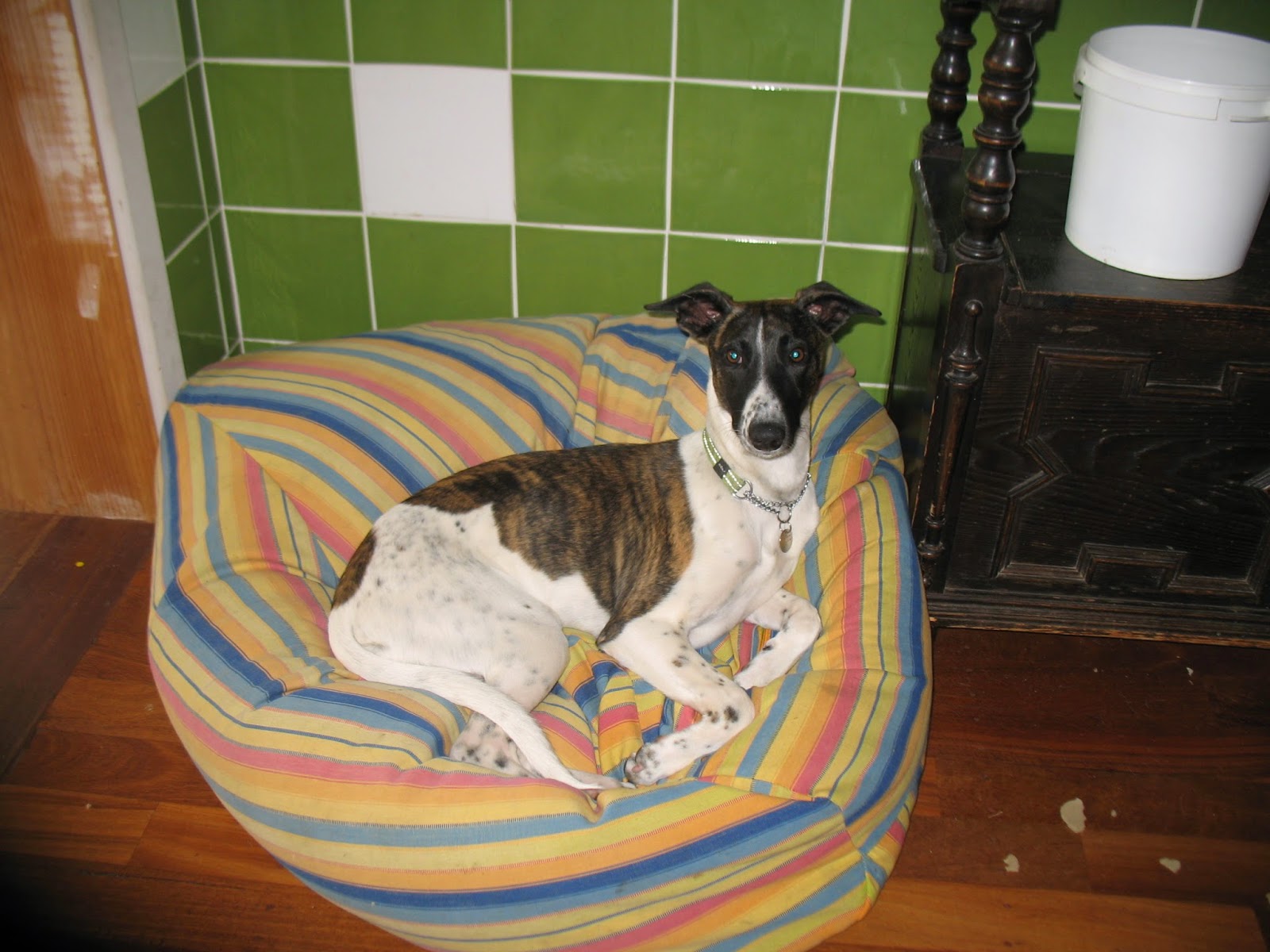 Email ThisBlogThis!Share to TwitterShare to FacebookShare to Pinterest
Labels: Inside