The Fr8 has landed. It left Amsterdam, went to Cologne, back to Amsterdam (more whores and coffee shops?), back to Cologne and on to Perth. She's a beauty for sure, Quality with a capital Q (read Zen and the Art of Motorcycle Maintenance for more on this). However, she's a bit on the heavy side so all my dreams of riding it sans electric assist went out the door pretty quickly. Maybe my legs aren't made of the right stuff, but in my defence there are more hills here than in Holland, Amy insisted on electric assist and we don't want it sitting in the garage like many a bike in Oz does. Here is what she looks like (but a different colour). 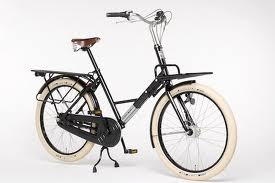 The Fr8 is based on the old style baker's/butcher's/postie's bike, so it's a cargo bike without the box (bak in bakfiets). It is a modular bike, with many configurations depending on how you like it. Check out Workcycles for tonnes of info on this. If you have any questions go to the Bakfiets en Meer blog and ask Henry, he designs and builds the bikes and he actually spends the time to answer people's questions (thanks Henry). If you're in Australia and want to buy one of these go to Dutch Cargo Bikes. So, here's how we converted the bike.

Firstly the specs of this Fr8:

If you want to convert a Workcycles Fr8 you may be better off ordering direct from Holland as we did. This is because things like Magura hydraulic brakes are not standard, so if you get a regular Fr8 you will need to buy rollers and remove them. This might not be a big deal if you can resell/re-use the wheel though and ordering direct takes a while (13 weeks for us!). Importing is also a hassle and may cost more too.

We decided to use the eZee 36V 14a conversion kit since it seems to be one of the best, most common kits on the market. We got it from Glowworm Bicycles in Sydney, who gave great advice and service (thanks Maurice). We went for the flat pack version, which comes with a rack and has a thinner battery than the vertical. The first decision to make is where to install your battery. I wanted to put it behind the seat post but there wasn't quite enough room. Another option was the panniers, but there's no way to lock your battery this way. The rear rack was out of the question due to the child seat, so I opted for the front rack. There are pros and cons to this, there's less wiring needed but it means the front crate cannot easily be removed. If you decide to put it on the rear rack then don't buy the Fr8 rack when you buy the bike, just get the rear bumper and install the rack that comes with the eZee flat pack kit (but be aware it won't take the weight of the sturdier Fr8 rack which can take 80 kg+). The advantage of this option is that you can lock the battery to the rear rack and it won't get pinched. Anyway, the next step is what kind of crate to put on the front rack and I had a doozie lying around the shed. An old banana box we got for free a few years back when we were buying Vacola preserving jars. It's pretty rickety to say the least, but I think it suits the bike to a T so I zipped a few screws in and it was ready. Like Jack Nicholson's football helmet in Easy Rider it has it all, style, panache and utility… 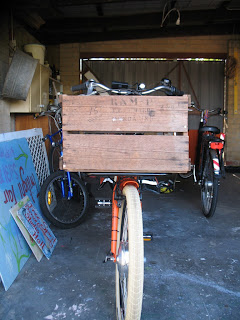 Maurice suggested putting a false floor in the crate, which is a great idea and worked well. Here's how I did it. Firstly I decided on how to lay out the components, with the battery at the rear to allow for easy access to the key hole and the controller at the front. 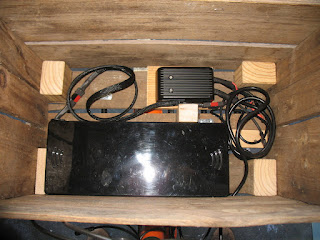 Then I screwed the controller on to a piece of wood and attached this to the box to secure it (the wood and controller are the same height as the battery so the false floor is flat). 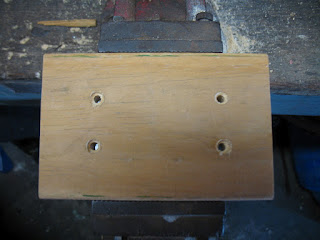 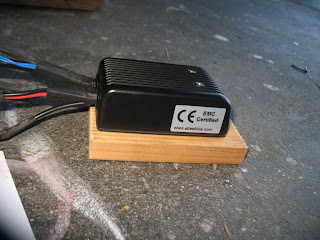 Then I drilled a hole for the key to go through (35mm drill bit) and screwed a piece of wood in each corner so that the false floor could support cargo weight. I left one piece of wood adjacent to the battery not attached to the crate to allow for removal of the battery if needed. The wood wedges the battery snugly all around so that it can't rattle around. 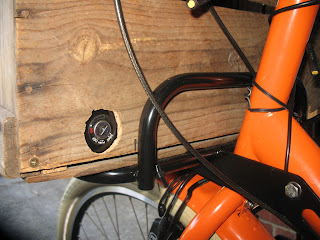 Next I got two U bolts (14mm between the threads) and drilled holes through the bottom of the crate to attach the crate to the rack firmly at the front. 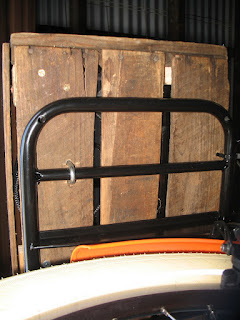 This stops side to side movement and anchors the crate really well, but I still put two cable ties at the back to ensure no front to back movement (no room for U bolts there due to battery). The last step was to put in the false floor. I bought an off cut of 3mm marine ply for $10 from a boat supply shop and cut it to fit the crate. Three licks of varnish for weather resistance and in it went snug as a bug. I'm still pondering whether and how to secure this. I need access to the battery to charge it, so the options are to either leave the floor loose or screw it to the bits of wood (need to unscrew every time you charge though) or cut out a window with a hinge on to allow for access. The dilemma is that I don't want it to be too hard to charge the battery but I don't want the battery to be pinchable. 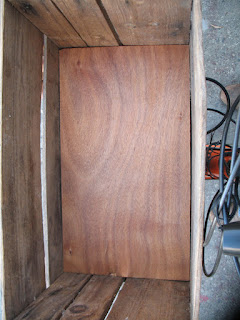 I got side tracked by the battery positioning, so rewind a bit: the first thing I did was install the Ezee wheel. This contains the motor inside the front hub. The hub fits a 10mm drop out and the Fr8 has 12mm drop outs, so I used a hand file to file them down. It was actually quite easy to do and only required removing the paint to fit nicely in. 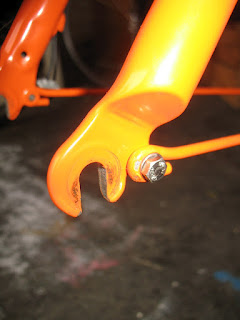 I replaced the Marathon plus tyre with the Big Apple to match the rear and adjusted the brakes for the thinner rim. To install the nuts and bolts to the hub I'd recommend the Renaissance manual, it has a great explanation of how to do this (the kit doesn't come with a manual unfortunately!).

Next I put the torque arms on. This stops the hub motor from spinning inside the drop outs and is a really important part. It's pretty easy to do, just follow the instructions from the Glowworm website (look under E-bike parts and accessories, torque arm). 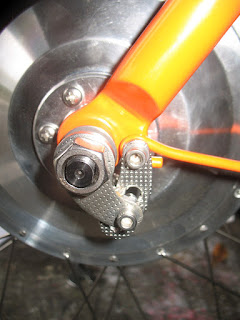 Then I fitted the LED display unit and cable router to the handle bar and head set respectively. Next I put the motor cable harness junction box together and installed it on the right fork (again, check the Glowworm E parts specific descriptions for instructions). It has a loop at the bottom to try to prevent any water from getting in to the motor. When you do this make sure you have enough slack in the cable to allow for full lock on your wheel. 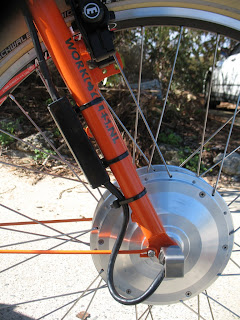 When you have this done you can install the throttle and check that the wheel spins when you turn it. If it doesn't you may have a problem, but don't worry you probably just forgot to plug something in to the controller or to turn the key! To attach the throttle just remove your hand grip (left usually) and put the eZee one on.

Lastly I installed the pedal sensor. This was the most daunting bit for me since I'd never removed a crank before, plus I didn't have the necessary tools. You may want to go to your local bike shop to get the crank off and on again if you're not confident about doing it yourself. I asked our bike mechanic mate Alex for a hand (thank you Alex, you're a star). He expertly whipped off the left crank with a crank extractor and we fitted the magnetic disc (make sure it is facing the right way by pedalling before you put the crank back on). Normally you remove the bottom bracket cup and fit the sensor behind the cup, but this wasn't possible with the Fr8 because the cup was smaller than the ring of the sensor. We just decided to cut off the metal ring attached to the sensor and cable tie the sensor directly onto the frame. It looks a bit shonky but it does the trick. When you pedal the sensor sends a signal to the controller to tell it to power up. Put the crank back on making sure it's oriented the opposite way to the right pedal, unless you want to ride like a Kangaroo! 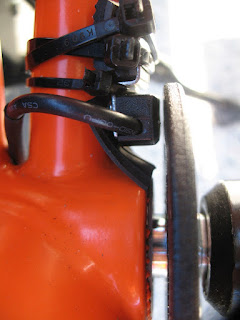 Re lights, the Fr8 comes with Busch and Muller dynamo lights run off a Shimano hub dynamo. The hub dynamo is not compatible with the front wheel Ezee kit so I considered other options. The lights are well done on the Fr8. For example the cable to the rear light runs through the frame and under the rear mud guard, so I thought I'd leave them on. I've ordered a Nordlicht bottle dynamo to run on the front wheel which will be compatible with the B & M lights and should fit on the light bracket on the front left fork. I'll report back on this when I get them. I ordered the dynamo through a great site called Dutch Bike Bits.

Phew, I think we're done. Please note that I am a DIY dunce and would have paid someone to do this for me if I could have. Despite reservations I plucked up the courage to do it myself and I'm glad I did. It may not be the best job ever and it did take me about 10 hours plus, but I'm chuffed with the end result. I don't think anyone else would care enough (or be crazy and anally retentive enough!) to make the crate look so neat and cool. So go on, do it yourself. When something goes wrong with it you're much more likely to be able to fix it if you installed it. Just remember to take your time to contemplate the job beforehand and if you get stuck just walk away and have a think about it instead of plugging on and getting it wrong.

These are the tools you'll need for the job: 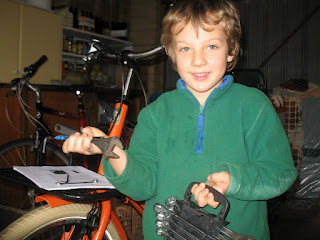 Phillips head screw driver
Cordless drill if you're putting a wooden crate on
Cable ties (200mm by 4.8mm worked well for most, plus a few smaller ones)
Pliers
Time and patience

By the way, regulations in Australia are that an electric bike's motor be no more than 200w, with no speed restriction. So, despite this being a stupid law in that it restricts the appeal of e-bikes to many people (keeping more cars on the road), the eZee kit has a 200w motor. This may change to match the EU's 250w limit, but I wouldn't bet on it.

That's it for now. I've ridden it a bit and it works a treat but I'll leave the review to another post. Now I just have to get that bloody Oasis song Married With Children out of my head!

"She's electric, she's got a family full of eccentrics"... 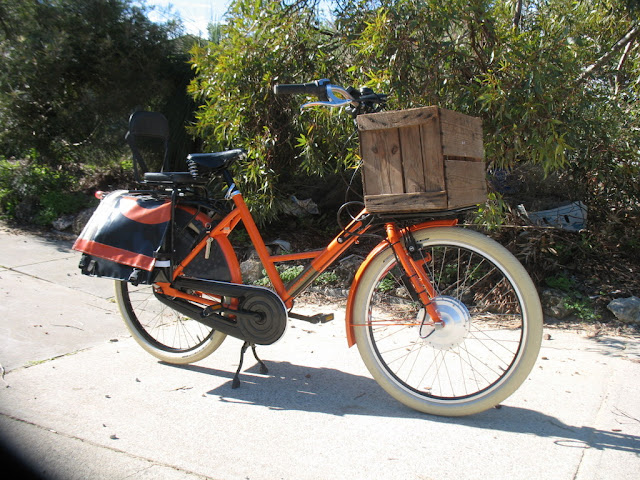 See part 2 here for the rest of the conversion.